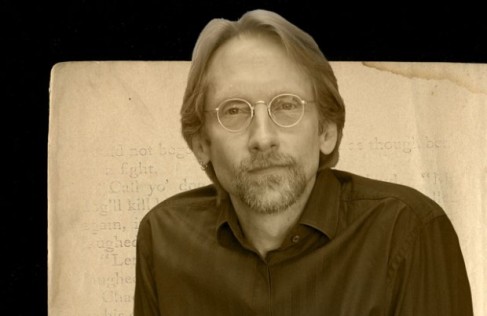 Fail, fail again, fail better.* This Samuel Beckett quote became quite a mantra last weekend when I spent two entire days inside the MA room of the Insitute for the Study of English in Africa with creative writing teachers and writers thinking about how to write and how to teach writing. The draw to give up my garden and dogs and books for a weekend was a visit by Lance Olsen (from the University of Utah) and author of numerous novels and the book Architectures of Possibility which had caught the attention of the course co-ordinators of the Rhodes University MA in creative writing. Olsen was asked at short notice if he would come to Rhodes and he said yes.

Olsen’s style of running a workshop is to pose issues/questions and then to let the conversations run… and they were always interesting given the participants: myself and Gillian Rennie who teach long-form journalism, Robert Berold, Paul Mason, Paul Wessels, Mxolisi Nyezwa, Joanne Hichens, Brian Walter, Jayne Morgan and Anton Krueger from the creative writing programme, Mindy Standford an editor and poet, Stacy Hardy from Chimurenga and James Sey from the University of Johannesburg who’s doing a PhD in creative writing at Wits.

We started by asking the question “Why I write?” and these were the answers:

Olsen’s sum-up of this session: Writing is conversing over time and space with
everybody who has ever written. Writing is a way to destabilise repetitive
narratives which promote rigidity, narrowness and compliance. He then continued to distill six ideas he thinks central to both writing and teaching writing:

He then insisted we think hard (and harder) about what is really being taught in our classes, not the stuff we say we do, but the stuff we actually convey beneath what we do. Once we’d thrashed this around a lot, he then (again) distilled the kind of learning that we want to happen in these spaces:

Then we moved into favoured territory for Olsen, the innovative and experimental, how would we know when we met it, saw it? We debated:

Robert: I don’t think about this as a category very much; but it would mean no compromise towards convention, to be full self-referential, fully committed to form.
Paul W: I have never thought of experimental writing as innovative, it can occur even with genre fiction, it’s an awareness, micro or macro and political. It re-presents in a fresh way.
Lance: It’s when we see our world anew.
Stacy: It ruptures what has been conventional. See aspects differently. Generates excitement. Language has the ability to be innovative. It’s when the matrix cracks.
Lance: When innovative or experimentation is called elitist and obscurest it prevents alternative narratives.
Paul M: It has a self-reflexive element, form and structure, a text aware of itself, reading must have an energy, can be a game or gimmick, but must have substance (emotional or political, must have a point.
Brian: I don’t relate to innovation for its own sake. ee cummings had substance and vision. It has sincerity of voice. It looks backwards as well as forwards, knows and is rooted in tradition. It’s a fraught area of new forms, new perceptions, new ways of seeing. Thomas Hardy invented new forms.
Lance: Eliot’s The Wasteland and Tristram Shandy.
Brian: Bob Dylan, so in your face but rooted in the tradition.
Robert: It happens when the colonised break the syntax of English.
James: Rock exploding the form. It has ephemerality. To the Lighthouse, Ulysses. Modernism which defined interiority as psychological. Never Let Me Go by Ishiguro.
Anthea: Innovation is always reacting, the question is against what? I’m interested in the experiments of Oulippism, using strong constraints to drive the experimentation.
Mxolisi: it’s a rejection of tradition. It involves a deep love, it has to do with being marginal, you can’t be innovative within.
Stacy: You can’t have a revolution without love.
Lance: the word experimentation has bad connotations. But it’s opposition and transgression.
Joanne: It has a truth that resonates. You can achieve it by placing a tighter constraint on oneself as the writer.
Lance: Nabokov responded to criticism of Lolita as porn by calling porn “the copulation of clichés”.
James: The form of porn is repetition.
Brian: think of experimental Englishes used by Nigerian writers lilke Ken Saro Wiwa.
Lance: Kathy Acker’s Blood and Guts at High School, the sentences and discourse innovation.
Gillian: One’s self is a natural source of energy, self discovery is important, why this topic/story?
Lance: Nietsche said the job of the teacher is to help the student become themselves.
Gillian: Innovation is subjective; who is the arbiter? Innovation provokes, and the reaction can be aversion. Innovation is easier to receive than produce.

We then detoured through reading, intervening and grading. Reading provoked the usual wail that students don’t come with the canon already digested [here, the canon being whatever the teacher of writing believes to be seminal usually based on their own fast loves]. Paul Mason and I got into a bit of a ding dong about this. My insistence is that all the bewailing in the world doesn’t change the digital natives before me and as a teacher I face the situation and deal with it (rather than expecting the school system, the English department, a core first-year course to fix it/them). We did talk about how rich a gift it is to have someone put a book in your hands and tell you to read because it will touch you, change your life, speak to your writing. The challenge is to lift reading out of dry academic territory and into a love affair.

Intervening in student work was another sticky place: for Gillian and me (who deal with journalism students schooled in the objective voice, the moral stance, the desire to change the world) getting to the motivation at the root of why they take on a project and want to write about it is key to them understanding their interventions in the world. Although this is not intended to be a psychological intervention it sits very close to one. Many in the group were uncomfortable with perusing motives by James Sey reminded us that “the encounter does have quasi-therapeutic qualities because of the depth of investment in the process. There are transferential relationships between student and work. These can be difficult to handle and direct.” Lance summed up by saying “if you put those discussion into narrative space they might enter psychological space” and Stacy added the caution: “The course should be situated in the writing space and not the life.” Lance proposed the Asking Model as a method to avoid criticism and judgement and to activate students: it’s simple but hard (according to Gillian Rennie who tried it today in her class): don’t pronounce, ask questions, ask why the choices were made like that.

On marking: Lance gave us a useful way to bend our projects to the university’s rules: “I don’t grade the writing, grades are given for signs of presence in class.”

What were some of the takeaways?
Mindy: not to let the weight of obligations be the starting point, start with the inspirational energy.
Robert: practice no judgement consciously, encourage failure.
Mxolisi: emphasis on art as slowing down, focus on what one wants to say, engage with the complex rather than the adrenaline rush.
Stacy: the politics of what we’re doing,there is value in foregrounding and drawing attention to politics, inquiring and asking the right questions.
Joanne: the Asking Model which puts the ball back in the student’s court, reading as a gift, a treat instead of a prerequisite.
Brian: discussion and dialogue. Integration of theory into discussion as a teaching strategy. Strengthen ourselves with more theory.
Paul M: Reading theory for pleasure.

Some of Lance Olsen’s writing prompts to get writing going and flowing:

(Somewhat) Daily News from the World of Literary Nonfiction

My View by Robyn Sassen and other writers

The arts at large by Robyn Sassen and other writers

"A work of art is important only as evidence, in its structure, of a new world which it has been created to affirm.”—William Carlos Williams