Your encounter with a poem on the page (the black on the white) is like — or should be like — meeting a person, says Glyn Maxwell in the second chapter to On Poetry. And you should judge it just like you judge a person (Maxwell’s strong opinion is that if the poet doesn’t put something of themself onto the page, then what was the point, the point must be presence). But what follows next is somewhat surprising and gives you a whole new way of judging and weighing the poems you read and write.

Maxwell has four criteria (or “a word and four ways… of meeting, of meaning”, page 33): solar, lunar, musical and visual — you weren’t expecting that.

Two ways with meaning, two without. There, I bet you’re surprised. But before you rush to test this out, listen to this: “If little passed between you, and little is remembered, and the voice has faded and the face has blurred — if any one of these is true — then your meeting was insignificant, the poem inadequate. Or, if in your encounter with person or poem, perhaps you were. To uphold the metaphor, it does rather take two” (page 34).

To backtrack a little and remind ourselves that the white is still pressing down upon us and that we are writing against this pressure, Maxwell says that line-break (and very especially in free form poetry without rhyme or metre) must be mastered. It’s not a device to be chucked around on a whim, it’s the mark of time and timing, it makes meaning and it makes music.

And just before we go, the words from the end of “White”. 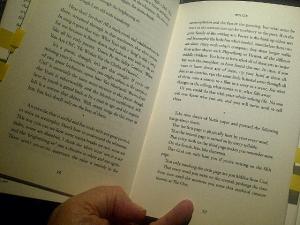 Take nine sheets of blank paper and pretend the following things about them:
That the first page is physically hurt by your every word.
That the second page is turned on by every syllable.
That every mark on the third page makes you remember more.
On the fourth, less, like dementia.
That God can only hear you if you’re writing on the fifth page.
That only touching the sixth page are you hidden from God.
That every word you write on the seventh prolongs the time from now until the moment you meet that mythical creature known as The One.
That every word you write on the eighth brings that moment closer, yes, but makes your time together shorter.
The ninth page says you have only nine words left in your life.

Daily Discussions of craft and the writing life

My View by Robyn Sassen and other writers

The arts at large by Robyn Sassen and other writers